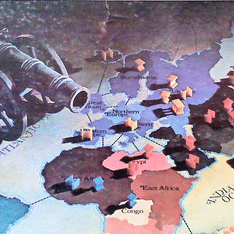 On a recent weekend, my wonderful wife Melanie presented me with a surprise that was nearly a year in the making: a Risk Reunion!

First, I need to explain how Risk, the board game of world domination, played an important part in the history of the Silver Heart Inn.

Since seventh grade, I was close friends with Evan, who lived in this beautiful house with his grandparents.  I visited him here often, and got a glimpse of the many rooms.  I recall one occassion when we stayed overnight in the Little House, the cottage in the back.  With no adult supervision, we stayed up the whole night.  On the huge console TV, we watched Johnnie Carson on the Tonight Show, then scary movie after cheesy movie on the Late Show.

Starting in our Junior year of High School (1978, Go Bears!), Evan hosted a game of Risk on Saturday nights in the Dining Room.  Anywhere from five to fifteen people showed up each week to play.  Most of the time, we played multi-board games, split into two alliances and rolled the dice with a special program that Evan wrote in BASIC on his TRS-80.  I always played green, Evan was blue, and several of the other regulars had their colors: Barton was black, Scott was red.  We had T-shirts made in our colors with the words, “I take risks” and a special pocket on the sleeve for our Risk card sets.

I know what you’re thinking, “Musta been pencil-neck geek Central in there!”  I will only say in our defense that we were perfectly NORMAL high school students of our time.  We all had cars, and most of us had girlfriends.  My letter jacket was adorned with medals and pins from my triumphs in Math relays, but the gold C I wore came from JV track I ran sophomore year.  Like I said, normal.

After high school, our lives all followed their own separate ways:

– I spent time in the Navy and Navy Reserve and became an IT weenie (“Could you reboot one more time, ma’am?”).

– Scott was a part-time corrections officer and become a successful marketer of food products.

– Barton was a software developer team lead at Garmin (my own dream company to work for), and became an accomplished Contra dancer in his spare time.

Zoom ahead to 2010.  Evan came to town and called a few of us to meet at Arthur Bryant’s, his favorite barbecue place.  We learned that the beautiful house was going on the market.  Melanie has dreamed of running a Bed & Breakfast for a long time, and was convinced that this wonderful house I knew from childhood, would be perfect to welcome guests in.  It took us a year and a half to get our finances in order to make an offer, but soon the house was ours!

The summer was a scorcher, and it was very difficult to make improvements on the Little House in the hot weather.  Melanie told me we had a booking for the weekend, so I took off work the week prior to make the enormous upgrades that still needed to be done.  Fortunately, everything progressed well, and by the end of the week, we had reimagined the Little House into a fabulous Beach Cottage.

Meanwhile, since before we even moved in, Melanie was contacting as many of my Risk buddies as she could locate to arrange this Risk Reunion.  A few weeks out, I happened to look on her phone and saw Scott’s name.  Melanie played it cool, and said that he was in town to visit family and had heard about our Bed & Breakfast plans from Evan.

Well, Friday night came, the time for Scott to arrive.  As soon as he did, I showed him around the place.  As I was doing that (surprise, surprise), Evan showed up.  I was still in the dark, and thought that maybe Evan stopped by because he knew that Scott was here.  Then Barton arrived, and I still didn’t put the pieces together.  Finally, Melanie presented us with our new, improved Risk shirts, and explained about this wonderful surprise.  We enjoyed wine and cheese that evening, and got caught up on each others’ lives.

On Saturday, after a breakfast of pumpkin pancakes, the Risk tournament began.  We used three boards, connected in a line from Kamchatka to Alaska.  After some jockeying for position, we soon formed into alliances: Barton and myself against Evan and Scott, black and green versus blue and red.  Missing Evan’s old TRS-80, we used an iPhone app to roll the dice.

After many hours of enjoyable banter and intense conflict, black and green finally succumbed to the onslaught.  Not to worry, however, we are planning a rematch next September.